POSSIBLE SPOILER PLOT POINT IF YOU HAVE NOT SEEN THE EPISODE OF THE NEW BLACK DYNAMITE CARTOON SERIES...Here it is to watch  'Just Beat It Or Jackson Five Across Yo' Eyes'

Okay now that I have that out of the way the other day I finally got around to watching the new BLACK DYNAMITE animated series on Adult Swim. It is based off the movie of the same name that came out a few years ago. The series and film is a homage with comedy elements of the Blacksploitation films from the 1970's era. Anyway this episode dealt with the 70's era Michael Jackson and the Jackson 5 with a few later elements of Michael Jackson's career thrown in the mix. In the episode we find out Michael is an alien creature adopted by the Jackson parents who disguise him as a human which was the Michael Jackson look of the 70's. Well back in 1992 for a SF Bay Guardian Cartoon Contest I created this cartoon below. I believe it was also blown up and shown in the Cartoon Art Museum gallery at the time of the contest. Now I don't claim this as a totally original idea and I am sure other creators thought of this as Michael evolved with his look at the time, I just never came across those similar ideas till now. If I did see this idea earlier I also may of forgotten about it as I see so much cartoon/parody material!;) Anyways here is my cartoon MOON WALKER below and it is pretty simple and straight forward in the idea. 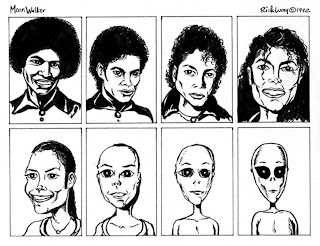 Posted by Rick Lucey at 8:18 PM No comments: