It is hard to believe I have not posted in my blog since November! Anyways I am still creating more than ever so there is much to catch up and post. So let us start with some monster images that are posted here. As a few of you may know I post a monster image every Monday on Facebook, twitter and Instagram. I even have a post on this blog with some from the last year or so. I usually create a monster illustrated scene in Photoshop now and then. There other times I may create some in Illustrator or do a traditional drawing or painting. Anyways the ones I will display here will mainly be created in Photoshop, with one being created Illustrator and another being a combination of Photoshop and traditional art. I even have Abe Lincoln taking on a creature in the Illinois wilderness. Also the monster at sea image on the bottom has a very short story that goes with it, that I wrote after creating the image. 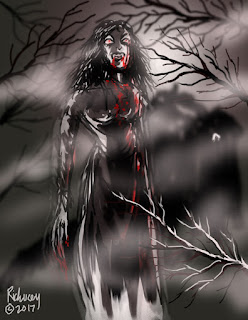 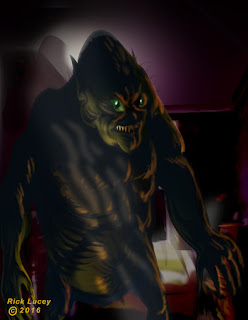 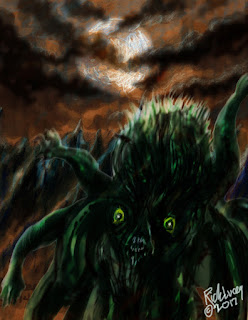 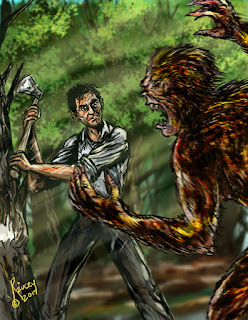 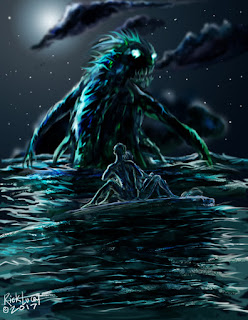 THE HORROR FROM THE SEA

My wife and I felt like we were the lucky ones to survive the sudden disaster of the ship we had been on. We appeared to be the only ones left from the 23 of us that had been on that vessel. Even though we had been in bed when this tragic event happened I had enough skills from my naval career to save my wife and myself. Along with a bit of survival gear we found a bit of the vessel to float on. It was a somewhat calm moonlit night and we huddled close to keep warm. Then out of nowhere there was this disturbance in front of us! Like a nightmare breaking into reality this slick object slowly rose out of the sea. The smell like the smell of every fear one could experience if that made sense filled the air around us! My wife and I could not say a word at this moment it was like our vocal cords had been ripped out!

The most unnerving thing was that it made no sound; the only noise was coming from the water surrounding it. My wife and I clutched each other tighter feeling each other's fear and our hearts beating to whatever horror was coming towards us. We saw it slowly and deliberately turn its head towards us with the eyes...they glowed! The glow of horror, terror and of a predator that had such easy prey! My mind raced this must be a nightmare, no some effect of too much drinking and heavy food late at night, I could not think straight! For a few unselfish brave seconds I though what was in my wife's mind? I could barely say I love you so much to her as this creature from some hellish place moved towards us...The eyes seemed to glow even stronger and I felt like they could cut us down from their glare! We grabbed each other so tight as the moon was blocked from this nightmarish mass! The last almost one would think crazy thought I had was how damn lucky the other ones were, how lucky they were gone and did not have to face this...horror from the sea...